Things To Do in Noida in February 2016 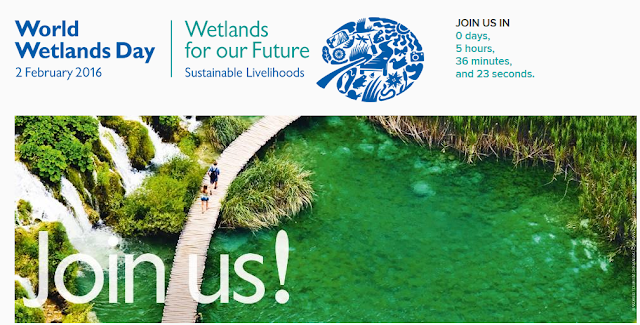 February 2 every year since 1997 is celebrated as World Wetlands Day. Ramsar city where the  Convention on wetlands was adopted provides material to help raise awareness about the value and importance of wetlands.This year the global theme is ‘Sustainable Livelihoods’.

Most of these wetlands are facing the brunt of fast paced real estate development that has taken place in the district. Filling up of these wetlands is destroying the ecosystems and along with it wildlife in the area. Unfortunately, wetlands are often viewed as wastelands. But they in fact act as natural sponges against river flooding, are homes to a variety of living forms and store carbon dioxide that help regulate climate change.

A Noida-based environmentalist, Vikrant Tongad, who is President of SAFE (Social Action for Forest and Environment) is working hard to save these ecosystems. He is a co-applicant for the case of shrinkage of Dadri-wetland. Another Noida-based environmentalist, Anand Arya spotted and notified the Green Court Dhanauri and Parsaul wetlands in year 2015. So far Okhla and Dadri wetlands are the only two officially recognized wetlands in the district.

“We request the state forest department to release a formal list of the wetlands in the district. And not just the list,…
Posted by Vikrant Tongad on Sunday, 31 January 2016

Things To Do in Noida in February 2016